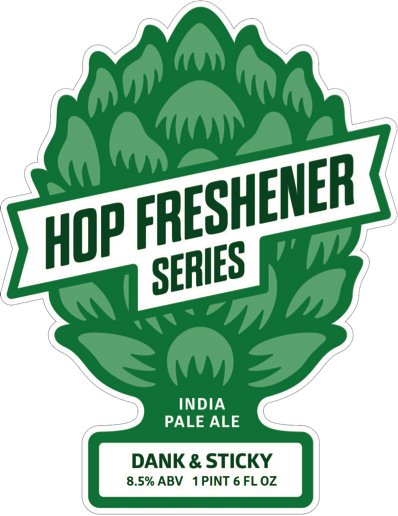 Dank & Sticky is one of four huge IPAs in the Hop Freshener Series (released quarterly) by The Hop Concept. Each IPA in the series is an exploration into different hop varieties, including brand new experimental hops.

The Hop Concept is a brand new brewery created by legendary breweries Port Brewing and The Lost Abbey. The aim of the brewery is to hone the skills of these two legendary breweries in to making the best IPAs they can produce and only making small one off batches to keep them super fresh.

The aroma of Dank & Sticky gives a nice big hit of citrus, resinous, creamy (from the head) and piny flavours. Everything you would expect from a well dry hopped big American IPA.

The flavour is exquisitely balanced with classic American IPA flavours of citrus, tropical fruits, resinous and piny notes with a lingering bitter after taste. This really gives you a well rounded, well formed, solid American IPA that is a perfect example of the beer style.

It is no surprise that this uses some of the best American hops on the market, including: Columbus, Chinook, Centennial, Exp. 05256, Simcoe, Mosaic, and Comet. All of these hops will be familiar to a hop head/beer geek/American IPA lover, except “Exp. 05256”, which is also known as “Experimental Pine Fruit”. Descriptions online indicate that this is “Simcoe and Summit like” with characteristics of “blackcurrant, dark fruit, mint, strong herbal notes and light grapefruit”.

This beer really lives up to it’s “Dank & Sticky” title (Dank meaning something of high quality to us Europeans) with the mouthfeel giving a very sticky and almost syrupy (but pleasantly so) like texture that leaves remnants on your tongue even after the liquid has passed through, allowing the bitterness of the IPA to have a long lingering after taste after the main event.

I would highly recommend this beer for it’s high quality, drink ability and exquisite flavour. I look forward to the next IPA in The Hop Freshener Series.

The little extra: Dank & Sticky packs an IBU of 85! so you know that there will be plenty of hop bitterness to compliment this delicious beer.

Where we bought it: Saveur Bieres – an amazing French online craft beer store

This site uses Akismet to reduce spam. Learn how your comment data is processed.